Arctic Monkeys: 'We're not a sing-a-longy kind of band' 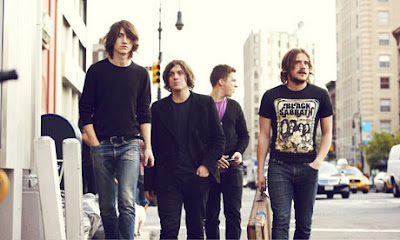 Monkeys have said that they don't believe they are a band you can describe as "a sing-a-longy" band.

The Sheffield rockers, who are currently touring Australia, have spoken about their first trip to the country in 2006 and revealed that they were "blown back" by the reception they got.

Speaking to the Sydney Morning Herald, Arctic Monkeys frontman Alex Turner said: "Everyone was singing and we were all kind of blown back. No one feels obligated to sing at our gigs: we're not a sing-a-longy kind of band and sometimes there are quite a lot of words. So when people do sing along they mean it."

Alex Turner had previously admitted that he's ''forgotten'' how to write a hit single.

The singer says that despite having five Top Five singles between the years 2005 and 2007 with his band, he no longer knows how to make a smash hit.

The singer said: "I have fucking forgotten how to do that… I don't know what that is any more, it's a different landscape these days.
Posted by The Tube at 05:00