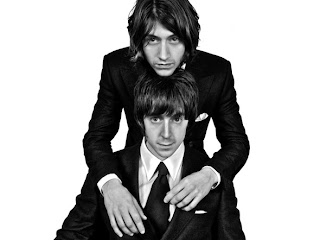 Alex Turner & co are up for seven gongs! See the full list here...

lead the nominations for this year's NME Awards, with Noel Gallagher  Album

also receiving multiple nods.
Zane Lowe was on hand last night (30th January) to announce the full list of hopefuls on his Radio 1 radio show, where the Suck It And See band came out on top with seven nominations.
Alex Turner and Co are up for the Best Album and Best Track and will do battle with Bombay Bicycle Club,  Album

for the Best British Band accolade.
Newcomer Lana Del Rey is up for three awards, including Best New Band alongside Tribes , Album

Wu Lyf and Foster the People.Album

Muse and Kasabian join Del Rey with three nominations each.
Noel Gallagher, who has already bagged the Godlike Genius Award, is also nominated for four other gongs, including Best Solo Artist, Best Album and Hero of the Year, where he will take on the likes of Dave Grohl    Album

and Matt Bellamy.
His brother and former Oasis Albums

hasn't fared quite so well in the list, featuring in both the Villain of the Year and Worst Band categories.
Justin Bieber Album

also feature in the Villain category, while Coldplay Album

and One Direction Album

have been nominated for the Worst Band gong.
The NME Awards 2012 take place at the O2 Academy Brixton on February 29. Tickets for the event will go on sale on Wednesday February 1 at 9am from the NME website.ETVCROP
Posted by The Tube at 07:15