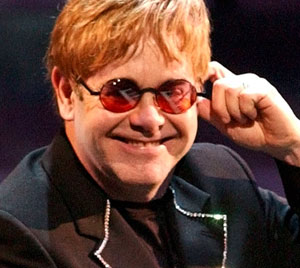 was always going to get Madonna  back for beating him to a Golden Globe this month and - much to his own (and our) amusement - he saved his attack for live television.

The 64 year old said: "Make sure you lip-synch good".During an appearance on America TV earlier, Elton was asked what advice he had for Madonna Download Here

ahead of her half time performance at Sunday's Super Bowl. At this point, a mischievous Elton saw his opportunity for revenge and he took it.
Elton then went on to imply that Madonna's Super Bowel show will be rubbish, saying: "I’ve never seen a decent one. Never ever.You have to play live, but I don’t think you can. In all fairness to everyone who’s done one before, you may be able to sing live, but it’s really hard to play live."
Elton's catty comments are sure to make Madonna feel a tad under pressure, with the singer rehearsing solidly for the last two weeks. It's thought that she will sing four songs, including Vogue and Give Me All Your Luvin (spelt that way to make sure everyone still think she's cool), while bendy types from Cirque du Soleil prance about in the background.
Although Madonna is yet to snipe back at Elton, the Brit has been on her back since she beat him to Best Original Song at the Golden Globes two weeks ago. Speaking before the event on the red carpet, Elton was offended that Madge had even made it into the category, telling reporters she had no "f***ing chance of winning" over him.
And after she did win, Elton's husband David Furnish wrote on Facebook: "Madonna winning Best Original Song truly shows how these awards have nothing to do with merit. Her acceptance speech was embarrassing in its narcissism."
If Madonna's speech was embarrassing, then Elton's behaviour before - and since - is like, way embarrassing. And we're not even mentioning the fact that he was dressed as an actual king while doing this interview.