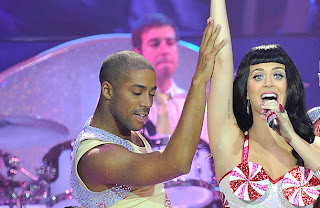 is being eased through the pain and ­embarrassment of her ­marriage breakdown to ­Russell Brand by one of her backing dancers.I can reveal buxom Katy has been spending lots of time crying on the muscled shoulder of dancer friend Malik Le Nost.

Now, hush you cynics... I’m assured he’s straight, ­available and at present their bond is nothing more than two friends hanging out. But, even so, if it’s good enough for J-Lo, ­Madonna and Mel B, then why not?
The pair were spotted having many a heart-to-heart last week during the final sweep of the Asia leg of Katy’s California Dreams tour – and my source says they have planned to meet in LA after the tour.
“They all lived in each other’s pockets and ­everyone knew how much Katy was suffering – not least of all Malik.

“During the tour last year, Katy became extremely close to her band and ­backing dancers,” says my all-seeing mole
“Throughout her trip to ­Jakarta and Manila, Katy spent a lot of time with him and the pair would often stay up late into the night chatting and ­drinking in the hotel bar of The Ritz-Carlton.
“When they were dancing on stage together, it was clear she only had eyes for him.
“In sound check on the day of the last show, the pair started falling about in fits of giggles over a private joke. It was as if they were a couple; Malik shot her cheeky winks across the stage and ­showered her with hugs. Katy was clearly loving the attention.”
But my person in the know insists nothing physical has ­occurred between them... yet.
“They insist they are just good friends but their closeness has definitely set tongues wagging in Katy’s camp. “Malik is ­absolutely ­gorgeous and clearly smitten by Katy, who finds ­everything he says hilarious.
“They have their own private jokes and he’s even developed a nickname for her – Messhy.
“Everyone was slightly confused as to what it meant and he revealed it was Japanese for messy. Katy is one of the messiest people you’ll meet.”
Mmm... Malik and Messhy. Has a certain ring to it. Let’s see what happens when they get together in La La Land.
Meanwhile, a friend of mine bumped into Russell, also in LA, this week: “He looked pale, gaunt and dreadful. He looks like he’s having a really tough time.”
Marriage is hard enough, but splits are the pits.