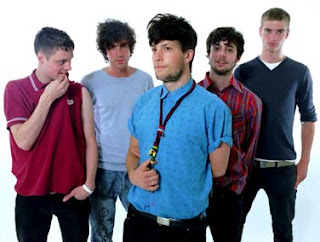 The Maccabees have claimed that their recent chart success will help give them "creative freedom".


The Brighton band, who saw their third LP 'Given To The Wild' nab the Number Four spot in the Official UK Album Chart earlier this month, told Drowned In Sound that they weren't worried that their increasing mainstream popularity would hinder their artistic progression.

For me, success will buy us creative freedom. I don't know why the opposite is the norm. When we made the first album, we had to do certain things to keep ourselves sustained. I'm excited by the idea of being successful enough to control things.

When asked about the popularity of guitar music, meanwhile, frontman Orlando Weeks replied: "I hadn't really noticed that times were so hard for guitar bands. I guess we are a guitar band, but I would never think of us in that way; a guitar band is much more straightforward. I don't think this sounds like a guitar record. Maybe it's just because I don't play guitar very well…"

Yesterday (January 27), tickets went onsale for The Maccabees' show at London's Alexandra Palace on June 8, which will be the biggest of their career so far. The band will also embark on a mammoth tour in March, playing a 12-date trek around the UK kicking off at Edinburgh HMV Picture House on March 5. It will wrap up at Cambridge Corn Exchange on March 19.