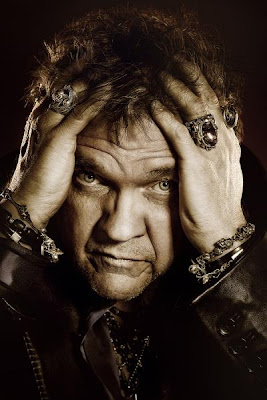 Meat Loaf says his upcoming new album, "Hell in a Handbasket," is "the most honest record I've ever done." It's also one of the quickest, coming less than two years after "Hang Cool Teddy Bear" in the U.S. after being released in Australia during September and Germany in December.

"They're both really good, and some people have said they like this one better than 'Hang Cool Teddy Bear,' " Meat Loaf tells Billboard.com. He adds that working with producer Rob Cavallo on the previous album "was kind of a new renaissance" that inspired him to work on "Hell in a Handbasket" -- due out March 13 -- concurrently with promoting "...Teddy Bear."

"I was doing vocals in closets," Meat Loaf recalls, who tapped his guitarist, Paul Crook, to produce "Hell in a Handbasket." "We were recording background vocals on the road, in hotel rooms. We were recording guitars on (tour) buses. I did nine vocals in 10 days on this record, which is pretty extraordinary. I've never done that in my life. Everything was much more spontaneous, and it was much more off the cuff." But the downside, he says, is "you wind up second-guessing yourself, and it's too late. So in a sense it kind of drove me crazy."

But Meat Loaf was able to make some corrections for later versions of the albums, remixing some of the tracks and resequencing the album for its 2012 release. "I would've done those (changes) had it not been rushed for Australia," Meat Loaf says. "We knew when we released it there that we'd want to (change) some things, which you don't usually get to do for an album."

As for the "honesty" of the album, the singer says it comes from lyrics that deal with social and political views and his sense that the world is, as the title suggests, "going to hell in a handbasket."

"I did it through my eyes this time," Meat Loaf explains. "Before I always hid behind characters. 'Hang Cool Teddy Bear' is behind the eyes of a character. 'Bat Out of Hell' is behind the eyes of Peter Pan and Wendy and (Capt.) Hook and Jim Steinman's very strange, weird musical Neverland. But on this one I was going through my past and bringing up thoughts for these things that have happened to me or people I've seen, and a lot of MSNBC and Fox newscasts...But it's all through metaphors and things. I couldn't call it 'The World's Going to Hell in a Handbasket,' though, 'cause that's too long of a title."

The album includes some unique collaborations, including rapper Chuck D (through Meat Loaf's son-in-law, Scott Ian of Anthrax) on "Mad Mad World/The Good God is a Woman and She Don't Like Ugly," and Lil Jon, John Rich and Sugar Ray's Mark McGrath on "Stand in the Storm," which was a charity iTunes single during Meat Loaf's 2011 stint on NBC's "Celebrity Apprentice." "Hell in a Handbasket" also includes a cover of the Mamas & the Papas' "California Dreamin'," which Meat Loaf feels "is really, really dark. It's not the happy pop ditty everyone thinks it is. I think John Phillips wrote this about...the fear that people have of following their dreams which fit the album's theme really well."

Meat Loaf is hoping to line up some TV appearances to promote "Hell in a Handbasket," but after an arduous "Hang Cool Teddy Bear" tour, which was hampered by health issues, he's not sure about hitting the road again any time soon. "We toured through 2010 and up to August of 2011, and I would say it was the best year and a half of touring I ever had in my life," he explains. "In Australia I just got tired and exhausted and I had a swollen vocal cord, and in New Zealand it started bleeding. Now it's fine...but I'm looking more at TV and other things than anything else."

Meanwhile, Meat Loaf has plenty of other projects on his plate. Though he's not doing anything special for "Bat Out of Hell's" 35th anniversary this year ("I don't pay attention to that stuff") or for his 65th birthday in September ("You didn't have to bring that up, y'know..."), Meat Loaf says he has two more albums written -- a Christmas set and another collection of original material that he describes as "completely different" from his other release. "I'm not gonna tell you, but trust me -- it's completely different," he says. "If you called it anything, you'd call it a party record. As long as they keep wanting to me to (record), I'm good. They keep wanting me to do it all the time, so I will."Meat Loaf Download