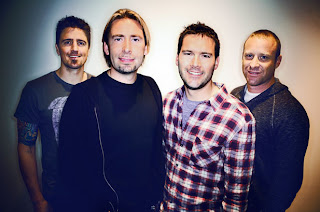 Apparently tired of being the butt of many a music joke, the band members of Nickelback (or the reps controlling the group's Twitter account) have gone online to sarcastically respond to every joke and insult being hurled their way.

In response to "Was driving down the street, and a @NickelbackDownload

song came on. I had an aneurism and violently shit myself at the same time. And my dog died," the band replied, "I bet it was the best day you've had in awhile. #yourwelcome [sic]."

Nickelback Take on Haters: 'We Don't Hear Many Complaints'

And after seeing the tweet "Nickelback came on the radio... Worse than rebecca black #earsbleeding," the band shot back, "Then it's working?!?!? Sweet!"

The band members didn't just go after haters who replied to them, but to anyone who used their name. Between the sarcastic replies, Nickelback continued to send friendly messages to fans and supporters.

Nickelback has addressed their haters before: the band performed at the halftime show of the Detroit Lions' Thanksgiving Day game despite the creation of an online petition trying to ban them from the event, and earlier this month, the group laughed off the Black KeysDownload

drummer Patrick Carney's claim that Nickelback's success was directly leading to the death of rock and roll.

In spite of the backlash, Nickelback continues to sell copies of their latest full-length, "Here and Now": the album comes in at No. 9 on last week's Billboard 200 and has sold 629,000 copies thus far, according to Nielsen SoundScan. Follow on Twitter
Posted by The Tube at 13:20