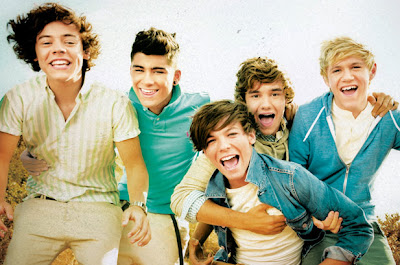 One Direction makes a striking jump straight into the top 10 on Billboard's Social 50 chart, rising 35-10 thanks to the Jan. 13 debut of its music video for "One Thing." The clip racked up more than 5 million views in its first five days of release, helping secure the group its first placing on any Billboard chart.The five young gents (ages 17-20) -- already a phenomenon in their homeland -- will support Big Time Rush on a U.S. tour beginning Feb. 24 in Chicago. One Direction's debut album, "Up All Night," will be released March 20 in the U.S. on Syco/Columbia.

The Social 50 chart's rankings are determined by activity monitored on YouTube, Vevo, Facebook, Twitter, MySpace and iLike, using a formula that blends weekly additions of friends/fans/followers along with weekly artist page views and weekly song plays.

During the tracking week that ended on Sunday, Jan. 15, One Direction posted a 78% gain in Vevo plays, a staggering 318% increase in YouTube views and a 55% jump in Facebook fans.

Just outside the top 10, the tally sees its highest debut since April 2, 2011 as Walk Off the Earth bows at No. 14. The group's music video for its cover of Gotye's "Somebody That I Used to Know" has been the most-watched clip on YouTube globally this month, with over 31 million views registered.The original version of the song, by Goyte featuring Kimbra, climbs 91-58 on the Billboard Hot 100 this week while Walk Off the Earth's take debuts at No. 20 on the Bubbling Under Hot 100 tally.

Elsewhere on the Social 50, Adele continues to hold down the No. 1 slot for a second week while Justin Bieber, Rihanna and Shakira are all steady at Nos. 2-4, respectively. David Guetta, who is profiting from his latest top 10 single on the Billboard Hot 100, "Turn Me On," jumps 10-5 to a new peak on the Social 50. Pitbull slips a notch to No. 6, Lady Gaga's down two to No. 7, Eminem's stationary at No. 8 and Bruno Mars flies 16-9. The latter artist is the featured guest on the song "Young, Wild & Free" by Snoop Dogg & Bruno Mars, and it too jumps back into the top 10 on the Hot 100 this week. (Khalifa meanwhile rallies 27-16 on the Social chart.)
Posted by The Tube at 04:15