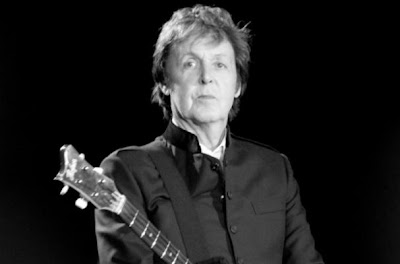 The event, which is taking place in London to support the release of the former Beatle's new solo album, will see McCartney answering questions from the media about his forthcoming album, 'Kisses On The Bottom', which is set for release on February 6.

Paulmccartney.com will stream 30 minutes from the event at some point between 4pm and 5pm today. One fan question will be put to McCartney as well. To be in the running, send your questions to kissesonthebottom@paulmccartney.com

McCartney's new solo album has taken its name from the lyrics in jazz man Fats Waller's 1935 hit 'I’m Gonna Sit Right Down And Write Myself A Letter', which McCartney covers on the album. The album artwork - pictured above - was shot by McCartney's daughter, photographer Mary McCartney.

The album has been recorded with producer Tommy LiPuma, Diana Krall and her band and also features appearances from Eric Clapton and Stevie Wonder. 'Kisses On The Bottom' is made up of songs McCartney listened to as a child as well as two new songs, 'My Valentine' and 'Only Our Hearts'.
Posted by The Tube at 06:13