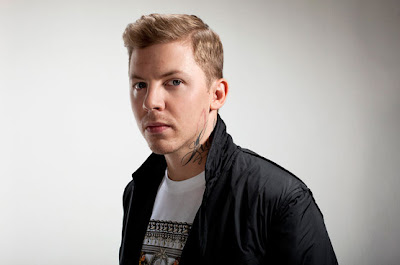 Chris Martin 'Acting As Professor Green's Mentor'
The Coldplay star has reached out to Pro after hearing about his dad's suicide...
13:34, Friday, 20 January 2012
Professor Green has revealed that Coldplay frontman Chris Martin is acting as his mentor.

According to The Sun, Martin has reached out to Pro after hearing about his dad's suicide, and has told the Read All About It hitmaker that if he ever feels down, he's only a phone call away.

Speaking of the Paradise rocker, Green - real name Stephen Manderson - told the tabloid: "Chris is clearly a brilliant mind. He took us out to dinner when we were on tour with their band and I really enjoyed having a good chinwag with him.

"He's very inquisitive. We went for dinner and he was asking me questions about growing up. Somehow we got on to the subject of my dad and obviously, with him having committed suicide, it all got quite dark. But instead of switching subjects we ended up talking more."

The 28-year old rapper continued: "It resulted in him saying, 'Well, if ever you are thinking about committing suicide, just phone me and we'll go for a pizza and just talk'. He is very, very typically English — very polite and he seems to care about the right things.

"Everyone in their crew took the time out to say 'Hi' and have a conversation with us. A lot of people don't take the time to do quite a lot of things as soon as they get any sniff of success, but it's the total opposite with Coldplay."

Despite Martin's offer, Green went on to admit that if he ever does need a chat with Chris, he will have to eat something other than pizza as he hates cheese.

The Never Be A Right Time MC revealed: "I just don't like it. I've tried to make myself like it because I see so many people enjoy it. My manager thought it was so funny that he put a selection of continental cheeses on my rider."
Posted by The Tube at 06:21