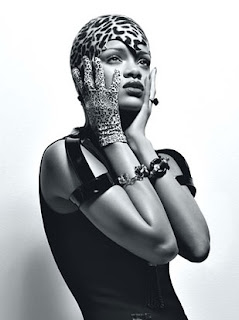 The Bajan babe jokes she will be getting a teardrop design next time...

As we previously reported, the We Found Lover hitmaker appeared to have the wordsThug Life - thought to be a tribute to late rapper Tupac - inked on her knuckles, later posting a snap of the design on the micro-blogging site.
the centre of controversy again with some Twitter users slamming her new body art, claiming that the 23-year old was 'glorifying' gang culture.

After tweeting the picture, RiRi found herself at
Responding to the accusations, the Bajan beauty wrote via her official account: "I #LOVE my new tattoo!!! Can't wait for yall to see it!!! I got it in 'Tibetan' this time!!! #approved,
"Chill babes #noshade. Err'body has an opinion, but yall know what yall can do with them!!! #THUGLIFE (sic)"
The You Da One singer later joked: "I'm thinking I shoulda got a tear drop instead!!! #THUGLIFE maybe next time. "All eyes on Rih, betta picture me rollin' #THUGLIFE."
In other Rihanna news, RiRi has been confirmed as the executive producer of a new reality TV show for Sky Living, where she will be joined by Girls Aloud star Nicola Roberts to discover a new fashion designer
Posted by The Tube at 06:34