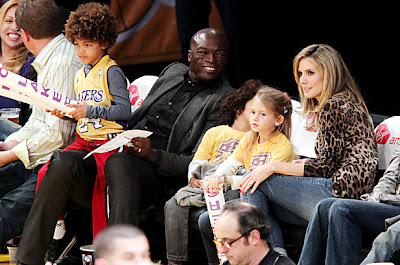 Seal and Heidi Klum are heading for divorce, according to a TMZ report. Sources tell the gossip site that the supermodel plans on filing divorce papers in L.A. County Superior Court early next week and will cite "irreconcilable differences" as the cause.


The couple tied the knot in May 2005 on a beach in Mexico and have three children together. Klum, 38, met Seal, 48, while she was pregnant with her daughter Leni, whom the singer later adopted.

A split would come as a surprise for the couple, who are known for renewing their vows each year and for not being shy about public displays of affection. Klum last posted a photo of her and Seal on Dec. 26 while vacationing in Aspen.

The "Project Runway" host attended the Golden Globes on Sunday without Seal. The "Kiss From a Rose" singer was recently in London promoting his most recent album, "Soul 2."

Reps for the pair have not commented on the divorce report.
Posted by The Tube at 10:35