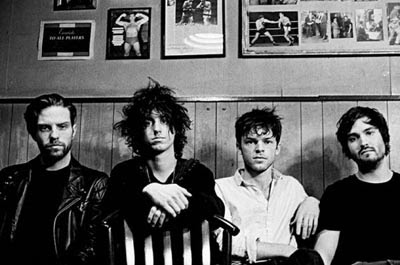 A spirited debut full of big choruses, but lacking in singular ingenuity.Of course, there’s never been such a thing as a dead cert. But as 2012 greets us with a new batch of hopefuls, it feels like being a guitar band tipped for big things is an ever-more parlous situation to be in. One thinks of several thousand sperm racing to be the one to fertilise that sole egg, or a wretched World War One tommy trudging through no man’s land as the sky shrieks with bullets. Last year, The Vaccines toured everywhere, released five singles and a top five album, but ended up somewhere short of the household name status that greeted Franz, the Arctics, The Libertines. And that, just for context, is an unqualified success story; the less said about Viva Brother the better.
One could not accuse Camden’s Tribes of not aiming high, though. Their plucky debut does its utmost to feel big at every turn, both in terms of influence and songwriting. The likes of Whenever and When My Day Comes judiciously mix gritty Pixies quiet-loudness, arch Britpop phrasing, and a splash of Razorlight swagger into something urgent and upfront. Pretty much every track here boasts a chorus apparently designed to be sung back by a room, or better still a field, of people.
Frontman Johnny Lloyd does like to ring out a bit of sentiment, trembling “What use is God if you can’t see him?” on Nightdriving, or thinking of the children on gay love scandal Sappho: “How d’ya tell a son that his daddy left his mum when she fell in love / With a girl like you?” We Were Children takes a brash stab at a sort of glammed-up and slovenly Libertines nostalgia, while particularly poignant is Corner of an English Field, an elegy to the band’s late friend Charlie Haddon of Ou Est Le Swimming Pool.
Will all this be enough to propel Tribes into the public consciousness? It is difficult to imagine Baby will be any sort of game-changer. It’s spirited enough, neatly sequenced, but perhaps lacks the ingenuity to rework its influences into something that feels new. Still, careers have been built on less. Time to see if they can outrun the pack.Louis Pattison