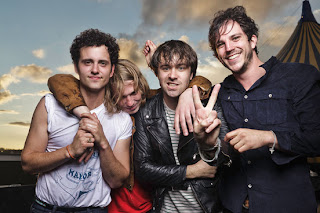 producer Ethan Johns will be at the controls.

The band, who are currently touring Australia, will record the follow-up to their successful debut album 'What Did You Expect From The Vaccines' in Belgium and have said that it will "definitely" come out this year.

Speaking to NME, frontman Justin Young said of how the band's second album was shaping up: "It's mostly written and we're going into the studio in Belgium in March to start recording so it'll definitely be out this year, without a doubt. We've definitely got six songs written that we all want to be on the record, but there's tonnes of other new songs and we're actually going into the studio out in Australia to work on ideas. I think we're in a good place with it and it's quite exciting."

Asked about what producer the band would be working with, Young revealed that it was Ethan Johns and that the band had been looking to work with him as he gives "warmth" to the albums he records.

Speaking about who the band would be working with as producer on their second album, Young replied "It's Ethan Johns", then asked why the band had opted for him, the singer said:

The reason we wanted to work with Ethan is not because he's a hit manufacturer, but he's a real songs man. If you listen to the records he's made, there's a real warmth there, all his albums are simple, but really well crafted and it feels like they really breathe. Our first record is quite linear, so it'd be nice to have something that breathes a bit more and with a bit more warmth and maturity, but that still sounds like us.


Young also spoke about which bits of Johns' work had made them want to work with him, revealing that Ryan Adams' 'Heartbreaker' was a particular favourite of his.

He said: "'Heartbreaker' is amazing. When I first heard that when I was 17 and it's still one of my favourite records of all time. I like his Laura Marling records and I think the first three Kings Of Leon records are great pop records. He also did Whiskeytown, who are one of our favourite bands, so to work with a producer like him and to be able to share ideas with him will be really exciting."

The Vaccines will tour the UK next May, playing four seaside dates. The jaunt will kick off at Dundee Caird Hall on May 2 before wrapping up with a gig at Brighton Centre on May 7.
Dubturbo
Posted by The Tube at 06:26