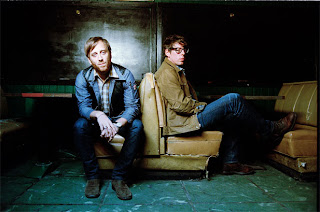 El Camino" isn't three months old yet and the North American tour hasn't even begun. But the Black Keys' Albums

next album is "already on the books," according to Dan Auerbach. Billboard

"We don't know when it would come out, but we want to try to get in the studio this year just to start working," Auerbach tells Billboard.com. He's not hazarding any guesses about what the group's eighth studio effort will sound like, however. "We won't know 'til we get in there. We don't get to practice together on the road. We're always trying to write and keep ideas going, but where we're most comfortable is in the studio. I can't wait to get back in there."ILLUSION3D

And that's even more attractive these days since it's Auerbach's own Easy Eye Studio in Nashville, which has gotten busy with bands such as JEFF the Brotherhood, the Growlers and others making use of the space while Auerbach and Keys mate Patrick Carney have been on tour. "It's really busy, to be honest," Auerbach reports. "I wasn't sure I wanted to open it to the public, and it's not really open to the public. But people are starting to book it, people I sort of know or trust, and it's pretty cool 'cause I love making records. It's my favorite thing to do. And having a place I got to design and flow the way I wanted it to is really nice, a total luxury.

"But Pat and I, we can record anywhere -- basements, abandoned buildings, studios. Location doesn't matter. All that matters is that it's Pat and I."

The duo recently finished a run through Europe -- "Some of the biggest shows we've ever played in Europe by far," Auerbach says -- and is getting ready to do the same on this side of the pond. The trek starts on March 2 in Cincinnati and includes a pair of shows at the Coachella Valley Music & Arts Festival in April before winding down May 16 in Milwaukee. Auerbach says the Keys' success has "exceeded all of our wildest dreams," but the gradual transition to big stages has felt natural.

"We're bringing everything with us," Auerbach says. "The sound is ours now. All the lights are ours, the stage itself. Pretty much everything you see we're traveling with, so we get to customize it. Hopefully we can have it sound really good. We're keeping it pretty simple in terms of lights, but we're doing a bunch of stuff. I don't want to ruin the surprise, but it's all kinda cool, old school lights, plus some videos." The keys have hired Karl Lemieux, who worked with Godspeed You Black Emperor, to design its lights as well as a film that runs behind the band during several songs. Auerbach also promises the group will be playing "songs from every album," not just concentrating on "El Camino" and it's Grammy Award-winning 2010 predecessor, "Brothers."

After North America, meanwhile, Auerbach says the Keys plan to "do some more touring in Europe" as well as Australia alongside to work on the next album. He's also looking forward to the April release of Dr. John's "Locked Down," which Auerbach produced and describes as "old school...It's not necessarily retro. We didn't want to make an 'old' record, but it has the sensibility of his first couple of records. There's a lot of African influence, lots of Ethiopian influence, kind of hard funk and gospel and some psychedelic stuff going on. And then Mac (Rebennack) is singing about some real s***; he always played the character of Dr. John and got to sing about hoodoo voodoo and all that, but this is some real stuff, really personal, talking about politics and his kids and life. It's really cool. This like for-real Mac. He was everything I hoped he'd be."
Posted by The Tube at 13:49