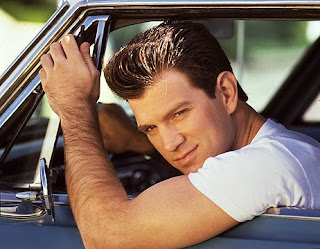 Always an unabashedly retro performer in thrall to rock's formative epoch, it was probably only a matter of time before Chris Isaak recorded an album of covers at the legendary Sun studios in Memphis. But just because a concept is a no-brainer, doesn't mean it should actually be carried out, as this rather pointless collection confirms.Beyond the Sun

, Jerry Lee Lewis, Roy Orbisonand Carl Perkins – the originals chosen by Isaak are such hallowed texts that they really need to be shaken up and distorted by anyone attempting to put their own stamp on them. But by kneeling oh-so reverently at the sainted crucible of rock'n'roll, the bequiffed crooner and his band have indulged in little more than an extended karaoke session, which was probably a lot of fun to record, but which really doesn't need to exist in any meaningful sense.
Quite frankly, who needs this album? Isaak is in strong voice as usual – and what has he always been if not a blatant combination of young Elvis in balladeer mode and Roy Orbison's creamy falsetto? – and his band imbue the material with a pleasant-enough country-pop bounce. But they stick so closely to the original arrangements you quickly begin to wonder why they bothered at all.
Their politely rocking version of Great Balls of Fire, for instance, may well be the kind of thing they knock out for laughs as a concert encore, but why record it for posterity? No one in a million years will ever yearn to listen to it over Jerry Lee's immortal original or his unhinged version from the Live at the Star Club album. It just all feels so unnecessary. Unless, that is, Beyond the Sun is actually some form of contractual obligation, which would certainly make sense, although certainly not from a creative point of view.
Only a fool would expect far-out eclecticism from this genially atavistic musician, of course, but you might've expected Isaak to ignite more fire behind the music that inspired him. Instead, he's delivered a sincerely meant yet curiously staid and pedestrian tribute.By Paul Whitelaw BBC Tv Live Tv
Posted by The Tube at 15:38