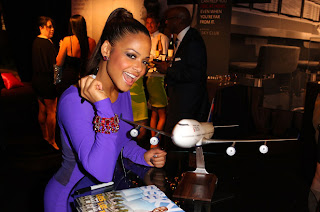 
The R&B singer (and "The Voice" social media correspondent) announced the news on Twitter on Sunday.

The label, also home to Drake and Nicki Minaj, among others, is expected to release Milian's much-delayed fourth album.

The new release has been in progress since 2008, and was formerly attached to labels including Interscope and Radio Killa Records, the home of Milian's ex-husband, The-Dream.

One version of the album, then title "Elope," was said to have been completed in 2009 under the helm of The-Dream and Tricky Stewart; where the project stands now remains to be seen. The former couple finalized their divorce in October 2011.
Posted by The Tube at 01:32