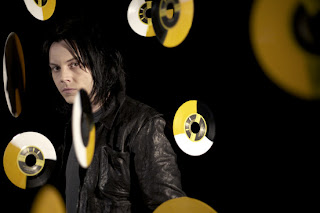 has revealed the tracklisting for his debut solo album, 'Blunderbuss'.

NME Comprising 13 tracks, the album will be released on April 23 through Third Man Records/XL. The former White Stripes man will be appearing on US comedy show Saturday Night Live on March 3 to play tracks off the record.

revealed the video for his debut solo single 'Love Interruption' - scroll down to the bottom of the page and click to watch. White released the video, which he also directed, on St Valentine's Day. The track sees him working with singer Ruby Amanfu, who provides backing vocals, and Emily Bowland on bass clarinet and Brooke Wagonner on Wurlitzer electric piano.

White has also announced plans for his debut solo live shows, which will take place in March in the United States. Prior to his show at Radio 1's Hackney Weekend on June 23-24, alongside Lana Del Rey and The Maccabees, White will play a number of Stateside shows, appearing in Chattanooga, Birmingham, Memphis and Tulsa.
Posted by The Tube at 15:42