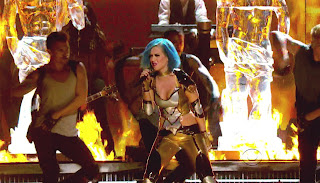 Katy Perry 'Hits Out At Russell Brand' On New Single

After her performance at the Grammys, Part Of Me is apparently about Russ...

may have not publicly addressed her split from husband Russell Brand, but she sent a pretty clear message out about her post-breakup emotions via her performance of new single Part Of Me at Sunday night's Grammy Awards (12th February).ipad vids
The midtempo pop song — Perry's next single — features several key phrases that speak to her relationship with Brand and the apparent emotional ups and downs she suffered along the way.
The track features the lyrics: "Days like this I want to drive away/ Pack bags and watch your shadow fade/ You chewed me up and spit me out like I was poison in your mouth/ You took my life, you drank me down/ But that was then and this is now."MTV
Perry's message in the song is one of empowerment and moving on, with lyrics like: "This is the part of me that you're never gonna ever take away from me," "You're not going to break my soul" and "Look at me, I'm a sparkling firework, a dancing flame/ You'll never put me out again, I'm glowing."
She briefly touches on the ever-present public attention she receives, wanting to throw away her phone and trying to discover who her real friends are.
Katy's most intense lyrics accuse a former lover of deception and a lost innocence, the most obvious Russell reference being a statement about her wedding band: "You can keep the diamond ring, it don't mean nothing anyway/ In fact, you can keep everything — except for me."
This isn't the first time Perry has taken to songwriting to express her feelings over a public breakup. Teenage Dream track Circle the Drain reportedly documents her rocky relationship with Gym Class Heroes frontman Travie McCoy.
Posted by The Tube at 02:09