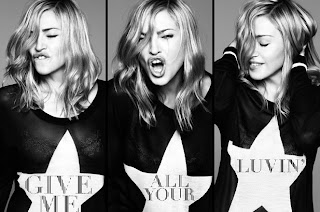 finally giving all her "Luvin" to her fans.itunes download

"Give Me All Your Luvin'," the long-waited first single from Madonna's forthcoming "M.D.N.A." album, made its debut on "On Air with Ryan Seacrest" on Los Angeles' 102.7 KIIS-FM on Friday (Feb. 3) morning, along with a mega-mix of tracks from the album. The song's flirty video, which features guest stars M.I.A. and Nicki Minaj as cheerleaders, was simultaneously released on Madonna's official YouTube channel. Watch below.Fans got their first glimpse of the track -- written by Madonna, Martin Solveig, M.I.A. and Nicki Minaj -- in November, when a "Give Me All Your Luvin'" demo leaked. "My true fans wouldn't do this," Madonna said at the time, addressing the leak through manager Guy Oseary's Twitter feed.


The song and mega-mix will be played every hour on participating Clear Channel stations this weekend, leading up to the Material Girl's Super Bowl half-time show performance in Indianapolis on Sunday.

Earlier this week, M.I.A. confirmed on the BBC that she and Minaj will join Madonna at the half-time set. And according to Will.i.am, "Sexy and I Know It" chart-toppers LMFAO will take the stage as well.

"M.D.N.A.," Madonna's 12th studio album and first for Interscope, will be released March 26. The album finds her working with producers William Orbit (who worked on her "Ray of Light"), as well as Martin Solveig, The Demolition Crew, Marco "Benny" Benassi and Alessandro "Alle" Benassi, Hardy "Indiigo" Muanza and Michael Malih (Madonna herself is also a producer).Trick Photography