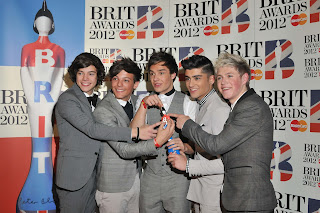 The Brit Award winners will be hitting the road next February...Profight

have announced a series of dates as part of their first ever UK tour.
Fresh from winning the Best Single gong at The Brit Awards 2012 last night (21st February) Harry Styles and Co will be bringing their hit album Up All Night to life next February.