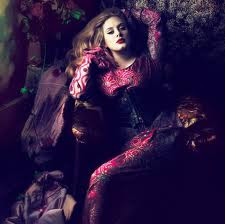 The singer leapfrogs Pink Floyd's Download 'The Dark Side Of The Moon' with her second album '21', which was released in 2011. This comes just three weeks after it was announced that Adele had surpassed Michael Jackon's sales for 'Bad'.

'21' has sold over 4.14million copies in the UK and is now the seventh highest selling album of all-time.

Adele can overtake Dire Straits, who sit in the 6th spot with 'Brothers In Arms', by selling just 12,000 more copies. According to the Official Charts Company, the singer could achieve this by the end of the week.

The top 5 biggest selling albums of all-time have remained the same for some time as no artist has come close to challenging, until now. Queen's Download'Greatest Hits' is Number One, with sales of 5.83million, and 'Sgt Pepper's Lonely Hearts Club Band' by The Beatles fills the Number Two slot with 5.04million.