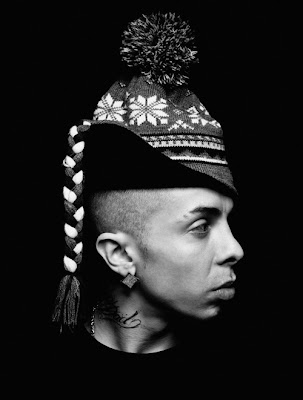 The Rockstar hitmaker has confessed he misses his bandmates...MTV

co-stars Fazer and Tulisa Contostavlos "for months."
Last month, the No Regrets singer admitted that he no longer talks to cousin and N-Dubz leading lady Tulisa, with Dappy now telling The Sun that he feels "lonely" withoutThe X Factor judge and Fazer by his side.
The 24-year old stated: "I'm not gonna lie. I haven't seen or spoke to T or Fazer for months and it's tough. It's not the same. We were together for so long and now it does get lonely."
Despite drifting apart from his N-Dubz bandmates, Dappy - whose new single Rockstar was kept off the top spot by Gotye yesterday (4th March) - has claimed he wanted to cover the Belgian singer's Someone I Used To Know.
The hat-wearing rapper stated: "I've been beaten by Gotye's Someone That I Used To Know but it's funny cos months back I begged my label to let me cover the song with a girl likeJessie J and release it here."
Dappy added: "But my label boss had just signed the song. He said I should be an A&R man."
Posted by The Tube at 14:04