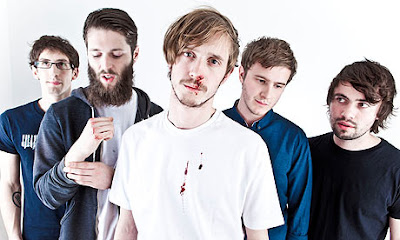 Who wants to be in a guitar band with the pressure of rescuing an apparently fading genre? Well Dry the River do, and their intention is clear. Bearing tattoos and professing to a love of US hardcore, the London-based five-piece have been up for the scrap since 2011’s well-received Weights and Measures EP, and tore up last year’s SXSW festival. Now, having made the BBC Sound of 2012 list, they’ll be looking to emulate the success of the Sound of 2011’s breakthrough guitar sorts, The Vaccines.Download

developed from singer Peter Liddle’s acoustic solo tour in 2009, after which accrued members, and now flatmates, convinced him to take his folk tunes in a heavier direction. It was a good idea, and successful enough to attract the interest of The National/Interpol producer Peter Katis to oversee this debut.
And it works – at least once the listener is clear of dull opener Animal Skins. If it was to be bracketed as a calling card effort, it’d be one that barely makes the wallet, its makers sounding twice their ages and uncomfortable with the burden of youth. But true form is found on the single New Ceremony: a belter of a tune, it comes complete with a heart-warming chorus.BBc
Much of this band’s recent promotion has focused on acoustic performances, and the full-blooded versions of their songs here may wrong-foot those expecting such gentleness. Channelling the energy of bands such as At the Drive-In and Grinderman, both History Book and the string-laden The Chambers & The Valves demonstrate the success of mining folk roots while the guitars are turned up to 10. Bible Belt earnestly devours classic Americana literature and hardship: "Lo and behold your mother is drinking again / This might be the coldest winter since records began." Importantly, Liddle’s last-to-leave-the-school-choir vocals provide an otherworldliness which offsets these songs’ gritty realism to great effect.
Although the band will be encouraged by the recent success of The Horrors and The Maccabees, both of whom have embraced electronics with devastating success, this is a direction Dry the River won't be taking any time soon. Their eagerness to record using analogue equipment can be heard throughout this set – it’s a wonder they weren’t mixed using steam-powered desks while mobile phones were banned from the premises.
Shallow Bed is a brave start for this long-hyped but still young band. Although at times the tunes and excitement commonly associated with a debut album can become lost in painful pursuit of authenticity, this is a surefooted and uncompromising collection.
Posted by The Tube at 04:04