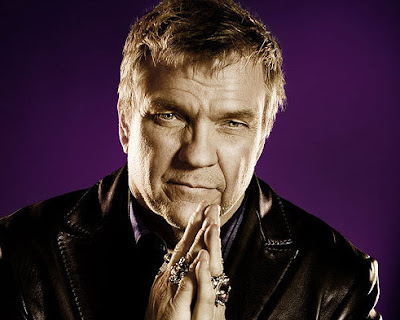 If we are to assume that Meat Loaf, Download

who doesn't author his own material, has some influence over the conceptual weave of his albums, then we must also assume that his writers were commissioned to write songs reflecting not only his personal malaise, but also his anger at the madness of the modern world.
However, this being Loaf – a born entertainer if ever there was one – any ostensibly serious intent is compromised by his unwillingness to nail his colours to the mast. You don't want to alienate your fans, after all. So all he's prepared to communicate is a sort of non-specific rage couched in generic metaphors about rainstorms, making him sound less like an apocalyptic preacher and more like a weatherman having a mental breakdown.
"These are my emotions," he thunders on All of Me, as if daring us to believe otherwise. While it's silly to get hung up on notions of integrity when dealing with Loaf – he is, after all, a distinctive interpreter who treats every song as though it's an epic mini-movie – it's simply not good enough to splutter "I cannot believe this stuff!" without bothering to explain what said stuff actually is.
Since his musical evolution, such as it is, stopped circa 1989, when fist-clenching stadium rock ruled supreme, perhaps he's still hacked off about the Iran/Contra crisis. It's impossible to tell. Even a cameo from Chuck D – yes, really – fails to elucidate.
Sonically, Loaf's latest largely ignores the faux-operatic power ballads for which he's best known in favour of bombastic rockers with ready-made choruses. But aside from the inherently – albeit fleetingly – amusing nature of its trademark excess, overall it lacks that knowing sense of humour which characterises his best work. Maybe the continuing absence of his erstwhile mentor, Jim Steinman, is to blame.BBC
Unconvincing and overbearing, it's like being ambushed by the cast of a Broadway rock musical. A Broadway rock musical with a sort of, y'know, political message. And stuff.
Posted by The Tube at 02:44