One Direction In Bowling Alley Bust-Up! 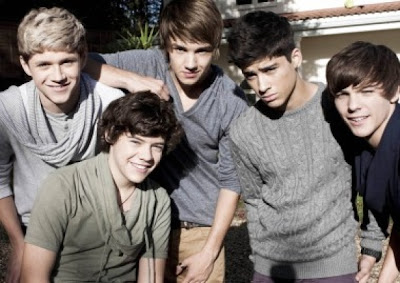 The 1D lads get a telling-off for chucking their balls around...

have been told off for a bowling alley bust-up in New York.
After playing to fans at New York’s Radio City Hall, The X Factor band took to the bowling alley to play a few games, but when the boys decided to hurl three balls down one lane, they ended up breaking the machinery.

Culprits Harry Styles and Louis Tomlinson got a stern telling-off from record label Syco after their post-gig celebrations - as Louis told The Daily Mirrior:
“The whole thing came off its hinges. It totally broke. We got a slap on the hand and were told off by the label for that.
“We’d taken over a lane, played about two games and then got a bit bored.
"So we started an experiment, throwing two or three balls at the same time.”
Harry said: “It was really bad but quite funny – but no one else thought so.”
One Direction have been on tour in America with Big Time Rush and have secured a slot on Saturday Night Live.
Posted by The Tube at 06:32