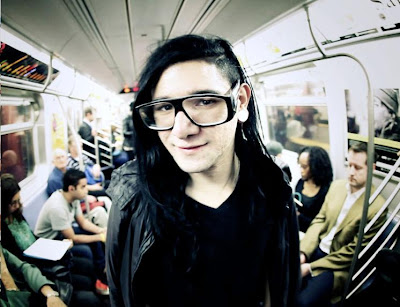 has revealed that he started dating Ellie Goulding Download

after they sparked up an internet romance.

The dubstep DJ and producer, who was first rumoured to be romantically involved with Goudling last month (February 16), told Rolling Stone that their relationship had blossomed after he sent her an unsolicited email. NME

When asked about how he met the 'Starry Eyed' singer, he replied: "I sent her an e-mail, like, 'I'm Skrillex. I don't know if you know who I am, but I love your shit. We started texting and talking on the phone."

He went on to add:

I love her. She's my fucking girl.

Last month (February 29), Skrillex was announced as the second headliner of this summer's South West Four Weekender. The DJ, who released his new EP 'Bangarang' in February, will headline the festival's closing night, with Chase and Status confirmed to close the show on the opening night. SW4 will be Skrillex's only festival appearance in London of 2012.

Ellie Goulding released her debut album, 'Lights', in 2010 and is thought to be currently working on its follow-up. In October last year, she said that she didn't want to talk about the recording sessions in case it "jinxed" her, but did reveal that the new LP would "definitely be different" to its predecessor.
Posted by The Tube at 13:37