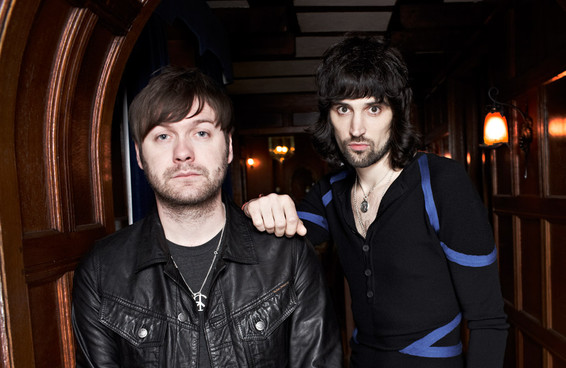 Kasabian Download played a cover of Bugsy Malone song 'We Could Have Been Anything That We Wanted To Be' at a party near Coachella festival last night (April 13).

The band made a special appearance at Mulberry's Firepit party at The Parker Hotel in Palm Springs ahead of their performance at the Californian festival tomorrow.

The song, which featured in the 1976 musical film, was the finale to Kasabian's short acoustic set of greatest hits, that included 'Days Are Forgotten', 'LSF', 'Fire' and 'Man Of Simple Pleasures'. The latter was dedicated to Freddie Cowan from The Vaccines, who was watching in the audience.

Speaking earlier in the evening about the choice of cover version,
Meighan said:


Honest to god, I probably watch it [Bugsy Malone] twice a year. It's just one of those amazing films. I remember getting funny feelings when I was a kid about Tallulah. I was probably about five years old when I saw it, but it was one of those moments y'know.

To watch an exclusive NME video interview with Kasabian, where they speak about their plans for their next album, scroll down and click below.

Check back at NME throughout the weekend to watch video performances and interviews with all the artists playing at the Mulberry parties, plus regular news updates and photos from Coachella festival itself.


The Black Keys, Arctic Monkeys and Pulp were among the bands who played the opening night of the California event last night. Today will see Radiohead, Noel Gallagher's
High Flying Birds, Azealia Banks and Bon Iver take to the stage at the festival, while Dr Dre and Snoop Dogg and At The Drive-In are scheduled to play at the bash on Sunday.
Posted by The Tube at 13:43