According to Williams, Paramore has recorded one song, titled "Daydreaming," for its fourth album, which will be produced by Justin Meldal-Johnsen and follow 2009's "Brand New Eyes." In December 2010, two of the band's founding members, guitarist Josh Farro and drummer Zac Farro, departed Paramore and accused the group of catering solely to Williams' needs while ignoring the rest of the members' ideas.

Since then, Paramore has released a handful of one-off singles, including "Monster" for the "Transformers: Dark of the Moon" soundtrack, while penning new songs for their fourth full-length. "There's no reason to lie about it, the first few months of writing were ridiculously draining and a lot more of a pain than a pleasure," Williams writes. "It was supposed to be fun right? We made it all the way to this point to just struggle some more." 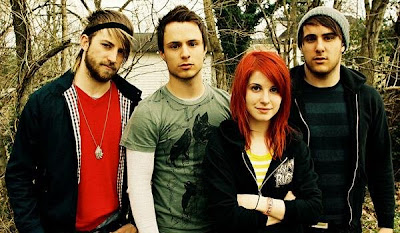 Williams also shares that the band is "working on a pretty strange schedule" and that there is no timetable for its next album release. "Usually, we are rushing to make a very strict deadline which so far has just not been right for this record. We cannot assure you it will be out this year. What we can tell you is that from now on, when we go in to create this thing, whether for a day at a time or for a month, you will be kept more informed," she writes.

Paramore's only scheduled shows for 2012 are at the Reading and Leeds festival from Aug. 24-26. Until then, the band will continue recording and giving props to its fans for their dedication. "Again, we just want to say thank you for your patience and the way you've kept us hungry to make music and to play shows," Williams writes. "This is a very incredible life to live and you have all been the best reminder of that."
Posted by The Tube at 13:58