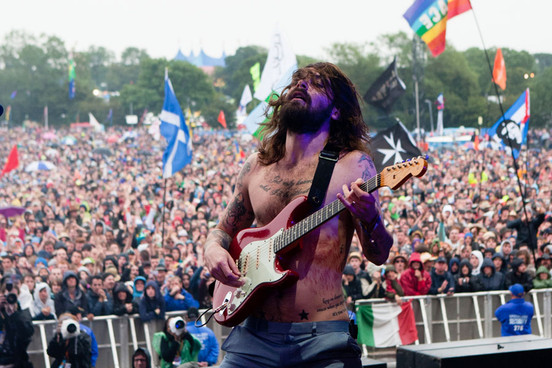 Biffy Clyro
Download Stingin’ Belle is the first taste of it and it doesn’t look a million miles from Only Revolutions, only a little bit weirder according to the band themselves. Speaking about the song and the new record, Simon said:
“It was one of the first songs that really clicked when we were recording. It represents the record and shows how over-the-top  the record is. It might be our last really over the top record. We’re still keeping things musical, still being as weird as we’ve always been.”
The crashing riffs and steady drum beat as seen in That Golden Rule are still present although Simon’s vocals are much more melodic à la Mountains. A nod to their Scottish roots is made in the bagpipe solo around the 2:40 mark. This certainly gives it a bit of a different spin to the band’s previous hits. It’s a great mixture of the things Biffy Clyro are good at -chest belting melodies and furious instrumentals. A catchy chorus guarantees it to be a live hit too.
Let’s hope the rest of the new Biffy album is a remix of some of the biggest successes from the last one. Using what you know works is a great idea but something a little bit different from the next release might be an even better one!