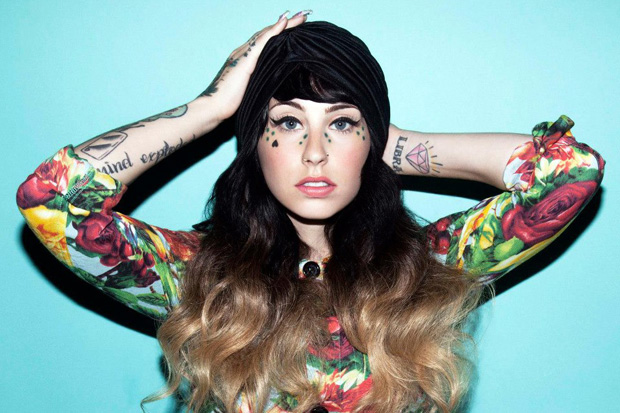 Kreayshawn,
Download rose to popularity in exceedingly modern fashion, but we've known how to describe her career since before she was born. She's a quintessential one-hit wonder for the digital age-- a girl who accidentally recorded a near-perfect pop-rap hit and followed it with a hollow thud of a record. If her breakout YouTube single, "Gucci Gucci", tore a hole in the conventions of pop and hip-hop, Somethin' Bout Kreay is the awkward seam that sticks out once someone has tried to sew it back up with some expensive twine.
Somethin' Bout Kreay would elicit the embarrassment of, say, walking in on a younger sibling dancing awkwardly in front of her bedroom mirror, were its shrill clatter not so forcefully distracting. These are dance songs so strident that no one could ever hope to move to them, pop songs so thin that no one could choose lines worth singing along to, rap verses so fumbly that practically anyone could rewrite them and make them better. Excepting "Gucci Gucci"-- which shoots out of the mess like a geyser of glitter-- each track can be appreciated primarily for the relief it offers from the previous clunker. To put things into perspective, Lil Debbie, Kreayshawn's mannequin twin of a sidekick, is currently making music miles catchier than Somethin' Bout Kreay, while Gucci Mane and Kreayshawn associate V-Nasty's BAYTL, lyrically speaking, might as well be Watch the Throne in comparison. Imagine watching the "Gucci Gucci" video for the first time and knowing that in the near future-- just about a year later-- you'd be nostalgic for how traditional, how authentic, it felt. Time can move in strange, unsettling ways.