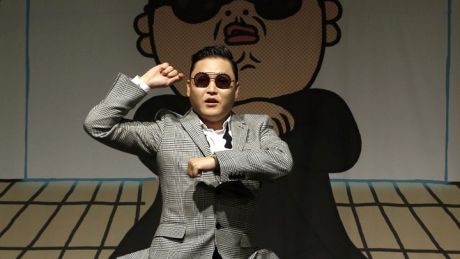 PSY
Number 1 inthe single chart has had more than 253m views in two months and became the most "liked" video on YouTube.
Psy, an established star in South Korea with six albums, taught Britney Spears his dance moves on the US TV show Ellen month.
Last week's No 1, Hall of Fame, by Irish band The Script, featuring rapper Will.i.am, dropped to No 2; US rapper Flo Rida is at No 3 with I Cry.
Meanwhile, the folk four-piece Mumford & Sons shot straight to the top of the album chart with Babel. It follows their 2009 award-winning debut, Sigh No More, which has re-charted at No 10. US rockers Green Day are at two with Uno; Pink holds the third spot with The Truth About Love.