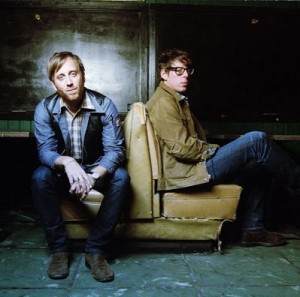 Download have confirmed that they have started working on new material.
Singer Dan Auerbach says that the Ohio duo hit a studio in Nashville to start working on tracks which might form the follow-up to their seventh record 'El Camino' in July.

"We spent a week in the studio," Auerbach told Rolling Stone. And while he admitted it wasn't "the most focused studio session," he and drummer Patrick Carney did "get some ideas down and started the ball rolling." The duo plan to start officially recording in early 2013, he said.

"We might not finish it until March since we have to tour so much, but we'll see," Carney added. "After July, we'll be able to know how long it'll take."NME

In terms of the sound of the record, Auerbach says they "never know what's going to happen…We don't talk about it. We don't plan it. We start recording, and then all of a sudden it starts to take shape and we have an idea." Each Black keys album, he says, is a "snapshot of a moment in time. We like to let them be like that…Sort of a spontaneous thing."

Although the Black Keys have worked with producer Danger Mouse for their last three albums, Auerbach says there are no collaborators set yet for the upcoming LP. "Not sure who we're gonna work with or if we're going to [produce] it ourselves," he says. "We haven't planned it out yet."
Posted by The Tube at 02:13