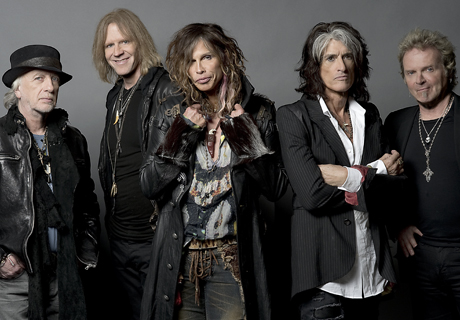 Aerosmith
have said that the world would be a much better place if people made more time to get laid.Pre-Order

"What's missing in the world," singer Steven Tyler tells The Guardian, "Is that people don't get laid enough." He then makes the subtle assertion: "It's not just about coming and effing – it's about making love and unbridled passion. The world doesn't make love enough."

Referring to his defining female genitalia as "the holy grail" in his autobiography, he added: "I certainly do say that!" before dubbing the vagina as "a creative force". NME

Aerosmith are set to release their 15th LP - 'Music From Another Dimension!' – on November 6. It will feature both Johnny Depp and John Lennon's eldest son Julian.

Speaking about the tracks on the album, 'Love Three Times A Day' and 'Lover A lot," Tyler said: "I was reading the lyrics upstairs and I was thinking, there's a lot of love. And I got shameful for a minute and thought, We should be more socially relevant…I'm not socially relevant but I write about love and passion – and it's fun! It's what I think a rock'n'roll band should be."
Posted by The Tube at 13:33