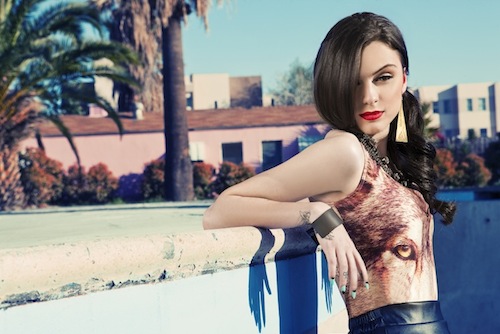 Cher Lloyd
Oath is fast becoming our favourite pop song of the year. And as much as it appropriates her brat-pop sound to something so incredibly, overtly American – so too does the song’s video. Dressing Cher up in a tiny little pink shorts’n'bra combo, the video sees her cavorting on a car bonnet before checking out with all her school pals as they dabble with a Wii and then rock on down to the beach. Cher even finds time to do a bit of none-too-subtle product placement for Simon Cowell’s new range of ‘X headphones’.
Is it too soon to sexualise Cher Lloyd like this? Swagger Jagger now feels comparatively chaste placed up against the all-American Cher of Oath, a Cher with her eyes set firmly on global domination and becoming the next Miley or Taylor. With a pop hook as good as Oath has, plus the added pull of hotly tipped US teen rapper Becky G (yes, the Selena Gomez lookalike), the hearts of a million youngsters are there for the taking, and she’s showing no signs of holding back.
Posted by The Tube at 11:53