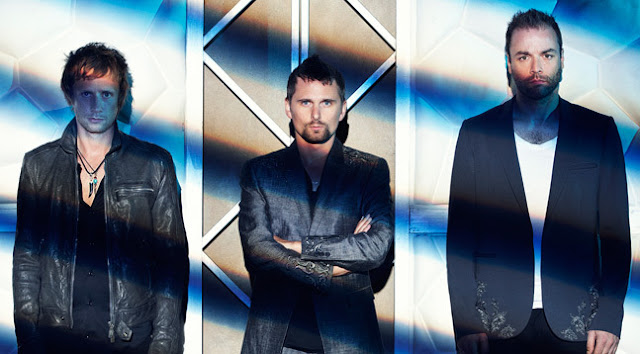 Muse
Download admit conquering America is their ultimate goal
The lads scored the best chart position of their career Stateside this week with new album, The 2nd Law.
The Devonshire rockers’ latest offering entered the US chart at No 2, behind fellow Brits Mumford & Sons.dailystar

And the lads remain firm believers in the American dream.
Frontman Matt Bellamy, 34, said: “Coldplay are the only English group to have had real success there in the last 15 years.”
Bassist Chris Wolstenholme, 33, agreed: “You don’t think about it when you start, you’re just content to be recognised on home soil. But then you want something more.”The new album is Muse’s most diverse record yet, with funk, dubstep and orchestral touches.But there’s still one musical style Muse have yet to master.
Matt laughed: “I’m disappointed that we don’t have many acoustic tracks, more quiet moments.
When I left the studio after having laid the foundations for the single Madness it was sparse.
“When I returned two days later, Chris and Dom Howard had put absolutely everything on it.”
Besides the UK, The 2nd Law hit No 1 across the world, but sales of albums in general are lower than when they released 2009’s The Resistance.

Chris explained: “My generation made the effort to buy CDs and even if you were disappointed, you forced yourself to keep playing it. Unfortunately, people download things and forget about them.”

Chris explained: “In the past, a group’s career may have been judged by albums. Today, bands have to provide a big spectacle.”
Posted by The Tube at 19:41