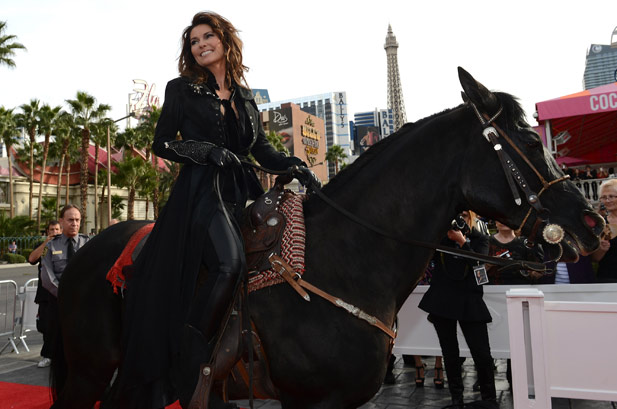 Shania Twain
arrived on horseback Wednesday for a two-year headline gig at Caesars Palace, parading up the Las Vegas Strip with a herd of 40 horses.Download

Promoters called the event a stampede, but hooves were kept to a steady, slow gait by nine wranglers who escorted Twain to a reception crowd of several hundred people in front of the famous Caesars fountains. Dozens more people watched from the sidewalk of the Flamingo resort across Las Vegas Boulevard.

"We could either lose a few hundred dollars inside or come out and see what kind of spectacle she puts on," said Steve Huffman, a UPS manager from Charleston, W.Va., who watched with his wife, Debi, from an overhead pedestrian walkway.

The couple was in town for his 52nd birthday and learned through a Twitter message that Twain planned to arrive on a horse. They identified Twain's hit, "Man, I Feel Like a Woman," as the country singer rode up the street, and they said they'll plan to see the show next year.Billboard