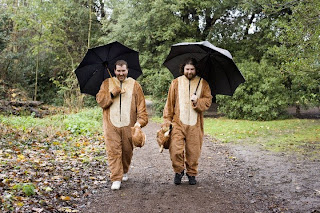 At first, The 2 Bears lookAlbums

like a novelty act – the gay subtext, the dressing up in bear suits, the vaguely unserious song titles. And in a world where one can wear a mouse head (deadmau5) or actually become robots (Daft Punk), the sight of two grown men capering about like manky team mascots suggests the likes of a moth-eaten Wombles, or The Tweets.Full Movies
However, the men in the increasingly skanky bear suits are Joe Goddard (of Hot Chip, and behind last year’s incredible solo single Gabriel) and man about town Raf Rundell. Since 2009 they’ve been delighting listeners with their Ministry of Sound radio show, Follow the Bears, and casually releasing EPs along the way.
They’ve taken the highlights of these EPs to construct their debut, and what an album it is. Their furry knees-up ‘theme tune’, Bear Hug, set their stall out nicely, having upped their profile last summer and alerted the disco nation to their wonder. Recent single Work brought a glimmer of house nation shininess to the dark days of the New Year, and earlier tunes Church and the title-track bookend the collection nicely.
Touches of skastep (a genre I’ve just invented) on Heart of the Congos, and country on Time in Mind, guarantee proceedings are never monotonous; these tangents also provide the pair’s considerable songwriting chops with a nice stretch. The utopian existence of the disco is but a fleeting temporary state, and so beneath the optimistic ‘dance your cares away’ vibe there’s also an element of the real world outside the club: Work acknowledges that times are tough, and while you have big dreams you need to actually, er, work at them.
Be Strong, in short, is superb: a joyous amalgam of disco textures and dancefloor stylings which never fail to bring a big grin to your face. A love letter to the last 20-plus years of dance nation sensations which references the finest moments with a cheery and cheeky approach, this is far from a pastiche. In a just world, this set would sell by the bucket-load. So yeah, follow the bears. You know it makes sense.BBC
Posted by The Tube at 11:10