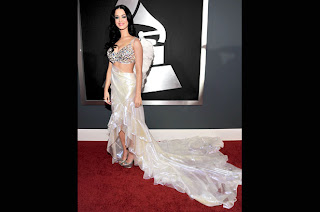 Katy Perry is the latest female pop star to be added to the lineup of performers at the Feb. 12 Grammy Awards show.

Following on the heels of yesterday's news that Adele will be singing at the 54th Grammy Awards, Perry was confirmed as a performer on Tuesday (Feb. 1). She joins previously-announced performers Jason Aldean, Kelly Clarkson Album

, Nicki Minaj and Taylor Swift. LL Cool J is signed on to host.

Perry is nominated for two awards this year: Record Of The Year and Best Pop Solo Performance, both for "Firework."

The "Teenage Dream" star also performed at the Grammys last year, singing "Not Like the Movies" as footage of her wedding to Russell Brand played on a large screen behind her. The couple has since split, recently announcing plans to divorce.Billboard  Learn Guitar
Posted by The Tube at 14:23