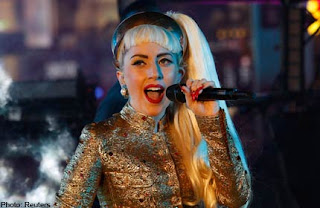 has responded after NME dubbed 'Born This Way' the "most pretentious album ever".

The singer took to Twitter to vent her anger after she read our recent blog post
"Oh the irony of winning "Most Pretentious Album Ever" from none other than NME. *eyeroll* I might laugh forever + then return to narcissism."
The singer's 2011 album was among a host of LPs criticised for being pretentious including Metallica Download

Gaga recently revealed that she overcame bulimia to save her singing voice. "I used to throw up all the time in high school, so I'm not that confident," she said.

"And maybe it's easier for me to talk about it now because I don't do it anymore. I wanted to be a skinny little ballerina but I was a voluptuous little Italian girl whose dad had meatballs on the table every night.