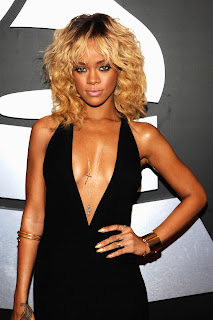 Ri is rumoured to be in the running to star in Houston biopic...

apparently one of the favourites being considered for the role.
The Daily Mail reports that Whitney's music mentor Clive Davis is helming the project and he reportedly wants filming to begin as soon as possible.
Some of the others in contention for the lead include Dreamgirls actress/singer Jennifer Hudson, who sang a heartfelt I Will Always Love You tribute at the 2012 Grammys, Vivica Fox, Megan Good and American Idol star Jordin Sparks, who shared the screen with Houston in the upcoming flick Sparkle.
It has also been suggested that Willow Smith may play a young Whitney.
Whitney herself was no stranger to films, appearing in the huge 1992 smash The Bodyguardand 1995's Waiting to Exhale, among others.
Whitney was honoured during Sunday's 84th Academy Awards in the In Memorium montage alongside other stars who passed in the last year, including like Elizabeth Taylor and Apple's co-founder Steve Jobs.
The superstar singer died on February 11 in Los Angeles, aged 48. The cause of death is still unknown.
Posted by The Tube at 13:14