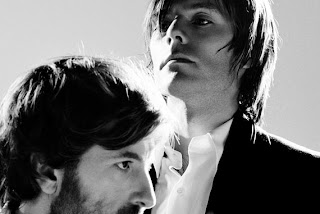 A classic black-and-white short, silent film by revered French director Georges Méliès from 1902, Le Voyage Dans La Lune (A Trip to the Moon) is rightfully considered one of the most important pieces in cinema history, itself inspired by HG Wells and Jules Verne. In the years since its unveiling, the film has influenced (read: been nicked by) a whole range of talented artists and musicians… and The Mighty Boosh.Album

Asked by the Fondation Groupama Gan and Fondation Technicolor to compose a new soundtrack for the film – an enormous honour, in the French film world and beyond – Nicolas Godin and Jean-Benoit Dunckel set about creating a modern score to bring the film to the attention of a new generation. As luck would have it, the results were ready in time for 2011’s Sundance Film Festival, and the restored film, complete with its all-new music, continues to play to audiences worldwide.Ipad Videos
Removed of its cinematic context, Le Voyage… is every bit an Air album. Since their debut LP, 1998’s Moon Safari, allowed the pair to pioneer an entirely new genre of lifestyle-accompanying melodic ethereality bound by a flexing of terrestrial funk, inspiring countless imitators in the process, the duo has always been on safe ground when their subject matter is off-Earth.
By no means strangers to the soundtrack – hear their wonderful Virgin Suicides work, and the elegant ennui of Lost in Translation – Air have conjured up yet another mini-masterpiece that fits the film and evokes the period it hails from perfectly. With guest vocalists Victoria Legrandand Au Revoir Simone on hand to play chanteuse roles on the sublime Who Am I Now? and Seven Stars respectively – tracks which easily exceed the usual vocalised fare on a soundtrack – and vignettes such as Retour sur Terre and Homme Lune, the album as a whole works well without the visuals. Opener Astronomic Club lopes menacingly, like spooky monks building an analogue spacecraft in the keen expectation of top-hatted adventurers. Cosmic Trip sprinkles itself kaleidoscopically into a starry blanket of layered keyboards, while closer Lava features a nice bit of what sounds like prog-banjo planking.
La Voyage Dans La Lune is the ‘most Air’ thing this duo may ever craft, a perfect set with which to remind audiences of their continuing excellence. If you’d lost touch with Godin and Dunckel after their last few albums, this might just be the return ticket needed to step back into their (other)world.Perhaps the ‘most Air’ collection the French pair has ever mustered.
Ian Wade BBc
Posted by The Tube at 13:01