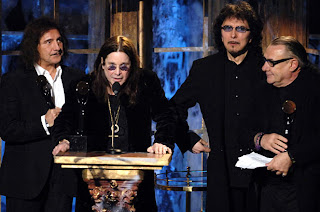 The Black Sabbath reunion hasn't faced enough obstacles already, what with guitarist Tony Iommi's recent lymphoma diagnosis moving the band's recording sessions to London andreportedly forcing them to pull out of a headlining slot at Coachella. Now drummer Bill Ward has threatened to back out of the reunion in a lengthy public statement to fans on his website, saying that he requires a "signable contract that reflects some dignity and respect toward me as an original member of the band."Download

"Several days ago, after nearly a year of trying to negotiate, another 'unsignable' contract was handed to me," he notes in the letter.

Ward says that he feels as if he's "getting the cold shoulder," noting that this is not the first time. Indeed, Ward has weathered contractual disagreements with management in the past: In 2004, Sharon Osbourne announced that Faith No More drummer Mike Bordin would replace Ward on an Ozzfest tour (due to disagreements over a contract). In that case, an agreement was eventually reached and Ward took his place on the tour.

That said, Ward says that he still wants the reunion to happen: "Let me say that although this has put me in some kind of holding pattern, I am packed and ready to leave the U.S. for England. More importantly, I definitely want to play on the album, and I definitely want to tour with Black Sabbath."

The reunion of Black Sabbath's orignal lineup had been long-rumored, though denied by Iommi at one point. In November, the group -- Iommi, Ozzy Osbourne, Geezer Butler and Bill Ward -- announced plans for a tour and their first album in over three decades, originally set for release in fall 2012 and produced by Rick Rubin. In October, Ozzy told Billboard Regarding the reunion, "If it works out, it'll work out. If it doesn't, I'll keep doing my thing."Boxshots