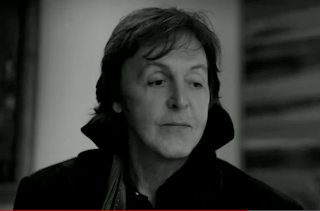 and a cast of stellar musicians entertained 2,800 guests with a dozen Beatles Albums

songs, three tunes from Wings and two numbers from his latest album, "Kisses on the Bottom."trickphoto

In a night with more standouts than not, a stroke of genius meant McCartney would go first after members of the Cirque du Soleil troupe worked its "Love" magic at the Los Angeles Convention Center to the strains of "Get Back" and "Sgt. Pepper's Lonely Hearts Club Band." McCartney himself provided a rousing entry to the festivities and an equally rousing closing, opening with "Magical Mystery Tour" and closing the night with the the end of "Abbey Road's" side two medley.Billboard

The rougher the acts treated McCartney's songs the better. Neil Young and Crazy Horse earned a standing ovation for giving "I Saw Her Standing There" a garage band treatment; Foo Fighters' were pitch-perfect with "Jet" and McCartney maneuvered through the stops and starts on the overlooked gem from "Band on the Run," "Nineteen Hundred and Eighty Five."

Slower material proved trickier but Norah Jones was able to unleash some inner-Willie Nelson on "Oh! Darling"; Diana Krall's voice floated perfectly over John Clayton's walking bass line and James Taylor's spare guitar on "For No One"; and Duane Eddy made "And I Love Her" a clean walk through reverb nation.

Alicia Keys hit a few rough patches on "Blackbird" and Katy Perry's "Hey Jude" had an unfulfilling flatness, but attention for many was likely fixated on her oversized hat that hung on one side, looking like something from an Aretha Franklin collection. A small stage in the center of the arena proved beneficial for Alison Krauss and Union Station's acoustic "No More Lonely Nights," but it revealed the lack of glue on Coldplay's version of "We can Work It Out," which bore an odd resemblance to Elvis Presley's hit "Suspicious Minds."