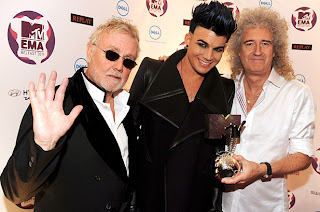 for a performance at the Sonisphere Festival in July, the "American Idol" alum reportedly told the UK's Daily Star.

"The intention is to pay tribute to Freddie and the band by singing some f***ing great songs," he reportedly said. "It's to keep the music alive for the fans and give it an energy that Freddie would have been proud of."

However, Lambert appeared to dismiss the remarks on his Twitter pageon Friday evening.

"Oooh them clever reporters takin my quotes outta context.... I haven't confirmed any guest appearances. I was talking about the EMA'S," he tweeted, without directly referencing the report in question. "That being said, I'm truly flattered by your jump to such glorious conclusions mr journalist!! :)"

Lambert previously performed with Queen at the 2009 "American Idol" finals as well as a November gig at the MTV EMAs.
In the Daily Star's report, he added that he'd love to head to the studio with the iconic band.Billoard

"It'd be cool to record with Brian [May] and Roger [Taylor]," he said. "Being asked to front Queen is the best thing that can possibly happen."

A rep for Queen's label, Hollywood Records, said that the pairing hasn't been set in stone quite yet.

"The Daily Star item only mentions that Adam may perform with Queen at Sonisphere. This is not confirmed. Nothing has been signed," the rep told Rolling Stone. "However, if this were to happen, Queen would be returning to the setting of their final concert with Freddie Mercury, which took place in 1986."

Lambert's sophomore album, "Trespassing," is due in March Trick Photography
.
Posted by The Tube at 09:36