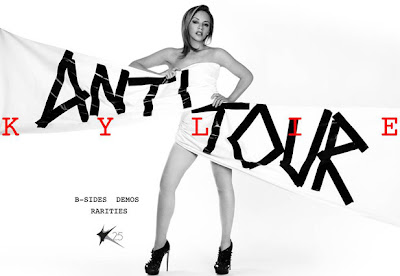 has announced the first concert dates of her upcoming intimate Anti tour, celebrating the diva's 25th year in the business.

She'll play the Palace Theater in Melbourne, Australia on March 18 and then the Big Top at Luna Park in Sydney on March 20. Both venues have a capacity of about 2,000. It's expected that further dates of the tour will be announced soon, which may include a visit to the U.S. later this year.Billboard

The trek is aimed squarely at Minogue's very devoted fans, as the show will focus on rarities, b-sides and demo recordings.

"(The) Anti tour is something I'm very keen on. I think it's an interesting concept," she told Sky News in Sydney last weekend. "That's something that's really just for super fans. There's not going to be hit songs in that show, but it's a good balance to something like (the) Aphrodite (tour)."

The 2011 Aphrodite trek was an eye-popping, hits-filled global tour that played 77 shows on five continents. The bulk of the shows included 200 costumes, 30 water fountains, 10 dancers and eight acrobats.

Minogue also told Sky News that she's "already started work on the new album," which should be released later this year. The set will follow 2010's "Aphrodite," which debuted and peaked at No. 19 on the Billboard 200 chart and reached No. 1 in the U.K.

The pop star's first single, "The Locomotion," was released in her native homeland of Australia, 25 years ago in 1987. In her quarter-century career, she has issued 11 studio albums and more than 50 singles.
Posted by The Tube at 22:34