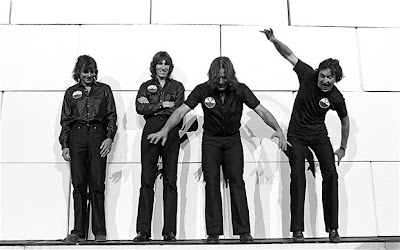 The powers that be behind the Pink Floyd Download

catalogue are not alone in assuming that someone, somewhere, doesn’t yet own one of this outfit’s certified classic LPs – also guilty are those ruling the canons of Led Zeppelin, The Rolling Stones, The Beatles and… well, you get the idea. Some bands will be mainstays on shelves until the death knell finally sounds for physical formats, and these 1965-founded prog-rockers are sure to be amongst them, with new revisions of old material arriving with impressive punctuality.
That Floyd are no longer a going concern has crystallised their legend. Consistently breaching international top 10s from 1973’s mainstream breakthrough The Dark Side of the Moon until 1994’s swansong The Division Bell, they’ve attained an untouchable status amongst critics; the sole exception to the five-stars-on-reissue rule being Roger Waters’ parting shot, 1983’s The Final Cut. But 1979’s The Wall is, once separated from its makers’ peak-period accolades, not quite as impressive as the preceding trio of tighter LPs – Dark Side…, 75’s Wish You Were Here and 77’s Animals – by virtue of its ambitious design.A sprawling monster of a rock opera, The Wall is ripe with rewards for intrepid listeners; but those returning to Floyd after the curt critiques proffered by the 40-odd-minute Animals were surely dizzied by this double-length package. It’s great, don’t be mistaken; but trim a little of its fat and it goes from a fantastic listen to an unforgettable one. The Wall hides its treats away beneath multi-layered distractions, its makers reacting negatively to their newly acquired stadium-sized crowds – Waters thought their fair-weather followers boorish.
But Floyd didn’t lose its collective head – they used The Wall to tackle their huge audiences on terms that suited both parties, presenting a dramatic live show that brought the album’s conceptual framework – isolation and detachment from the perspective of one Floyd Pinkerton, whose lifelong travails inform the lyrical content – to vivid life. The show tours to this day, albeit under Waters’ name – but then he’s the sole writer on all but four tracks here. Singles Comfortably Numb and Run Like Hell are David Gilmour co-writes, but the school choir-featuring Another Brick in the Wall (Part II), number one on both sides of the Atlantic, is all Waters’. The band’s biggest hit, it also represents prog’s commercial zenith.
This Experience edition – a grand Immersion edition is also available, with content comparable to the Dark Side… package released last September – features a third disc titled Work In Progress. It features a variety of demo versions, mostly of an impressive fidelity. Notable amongst these recordings are The Doctor, later shaped into Comfortably Numb, and Sexual Revolution, a blues-y affair which re-emerged in 1984 on Waters’ solo debut, The Pros and Cons of Hitch-Hiking. For the hardcore these demos comprise valuable additions to the commercially available Floyd catalogue; for anyone else, though, the magic of this set will be found in the original LP. It might take a while to find, but it’s there. BBc
Posted by The Tube at 02:31