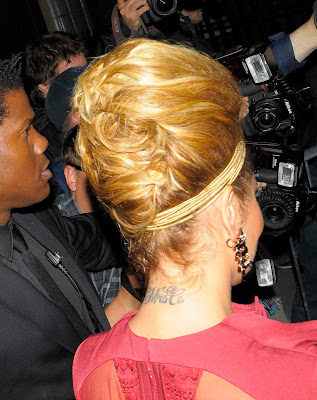 Cheryl Cole is apparently planning to erase ex-hubby Ashley Cole from her life for good by getting rid of her infamous 'Mrs C' tattoo.

Despite reports suggesting the Girls Aloud star was hoping to rekindle her relationship with Ashley, a source has claimed Chezza has made a New Year's resolution to ditch the ink on her neck.

According to the Daily Star, the 3 Words singer is 'certain' that the tattoo has to go, and is currently deciding between laser removal or having the ink redesigned.

An insider told the tabloid: "There's no chance of her getting back with Ashley and she no longer wants the reminder of his cheating ways on her skin,

"She's been looking at ideas and now just needs to decide whether to get it removed or reworked."

Despite plans to remove her tattoo, Cheryl has decided not to change back to her maiden name of Tweedy, as she fears it could damage her brand.

The 28-year old has previously claimed that she was happy to keep the tattoo, telling the Guardian a few weeks after her divorce: "I'm not ashamed of anything. I've got nothing to rub away."
Posted by The Tube at 04:05