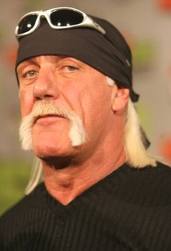 The grappler, who stars in his own reality TV series Hogan Knows Best, said that he used to be close mates with the metal titans' drummer Lars Ulrich during his days as a session musician.

He told The Sun: "I used to be a session musician before I was a wrestler. I played bass guitar. I was big pals with Lars Ulrich and he asked me if I wanted to play bass with Metallica in their early days but it didn't work out."

Hogan also spoke about his love for The Stone Roses and said that the reunited Manchester band were once the soundtrack to his workout sessions. He said of this: "I love the Stone Roses.Download Here

They're getting back together, right? That's cool man. I used to work out to some of their songs".

The wrestler also said he was aware that Kasabian  Download Here

often use his name as a pseudonym to check into hotel rooms under and joked that he wasn't happy about it.

Speaking about the Leicester four piece, Hogan said: "I heard about these guys. They have made a show about UK wrestling in the '80s, called 'Walk Like A Panther'. I know Rollerball Rocco, he's in it. He's my guy. I'll be his tag partner and sort them out for trashing hotel rooms under my name".
Posted by The Tube at 06:21