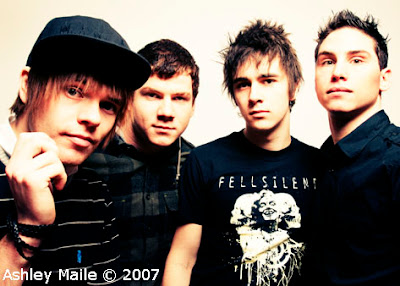 Enter Shikari have entered the Official UK Album Chart at Number Four tonight (January 22) with their new LP 'A Flash Flood Of Colour'.

The St Albans band had looked on course to claim their first Number One album earlier this week, but according to data from the Official Charts Company were beaten to the top spot by Adele's 21. Ed Sheeran nabbed the Number Two spot with '+-', while Coldplay's 'Xylo Myloto' charted at Number Three.

Last week's Number One – Bruno Mars' 'Doo Wops & Hooligans' – dropped to Number Five, with other artists in the Top 10 including Beyonce, The Vaccines and Rizzle Kicks. Tribes, meanwhile, saw their debut LP 'Baby' claim the Number 20 spot in its first week of release.

In the Official UK Singles Chart, Jessie J took the Number One spot for a second week with 'Domino', just ahead of Rizzle Kicks' 'Mama Do The Hump' and David Guetta's 'Titanium', which were Number Two and Three respectively.

Swedish House Mafia Vs Knife Party charted at Number Four with 'Antidote', while Flo Rida dropped three places to Number Five. Lloyd, Aviici, Pixie Lott, Taio Cruz and Coldplay made up the rest of the Top 10.
Posted by The Tube at 20:57